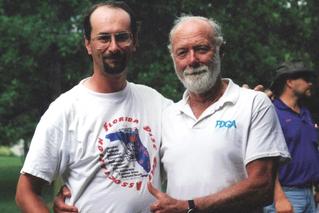 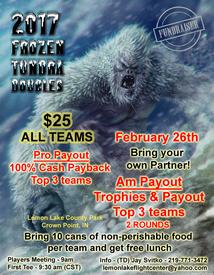 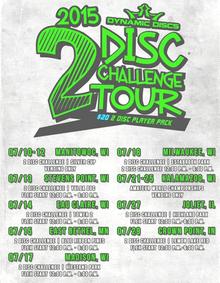 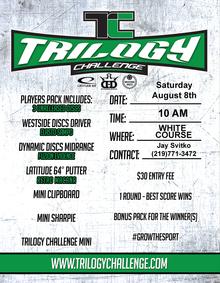 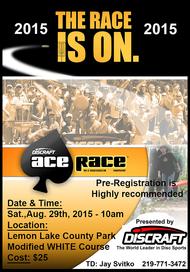 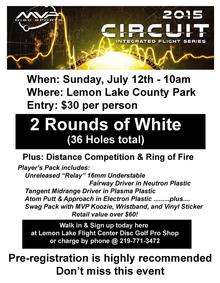 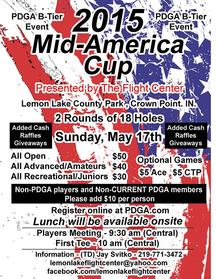 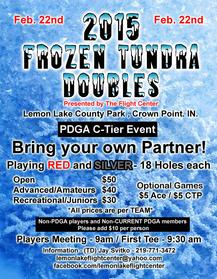 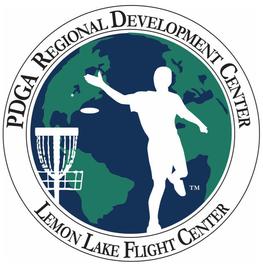 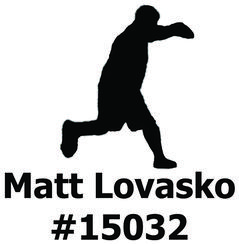 Flight Center and Events Director Jay Svitko, PDGA #7307, and wife Deb Svitko PDGA #45678 established the Flight Center business in cooperation with the county park board members in late 2010.  Jay joined the PDGA in 1992. He has assumed various leadership and support roles in NW Indiana Tournaments since 1995 and played a key role in getting the sport of Disc Golf started at Lemon Lake County Park. Career highlights include being the first PDGA Indiana State Coordinator, holding that position for 6 years and held one of only 6 original PDGA Marshall positions in 2004. Jay was instrumental in the negotiation and installation of the original Red course at Lemon Lake and with his return to the State of Indiana in 2009, Jay played a key role in the installation of Lemon Lake's White Course.  Jay has also played active administrative and leadership roles while living in the states of Ohio and Arizona.

THE FLIGHT CENTER at LEMON LAKE
The Flight Center has been designed to be all encompassing carrying a full scale line of disc golf products, hot and cold food concessions for disc golfers and the general public, provides a central source of information regarding all park programming throughout Lake County, provides park and course maps, scorecards, pencils and disc golf education every day.  The Center also implemented an onsite office with internet, multi-media and online scoring capabilities in 2014.  The Flight Center has also curated the Indiana State Museum for Disc Golf dedicate earlier this year. Located centrally in the park, The Flight Center provides easy access to all of Lemon Lake's courses, parking lots, flush restrooms and shelters.  The Center is open daily from 10AM - 6PM CST year round.  The Center also offers cross-country ski rentals from December through March weather permitting. 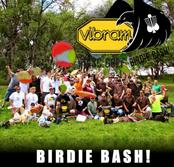 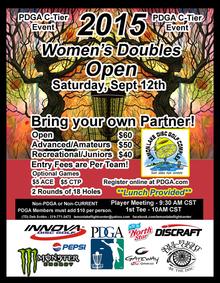 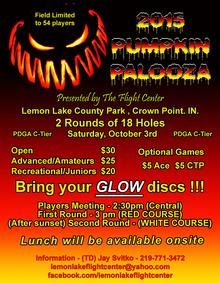 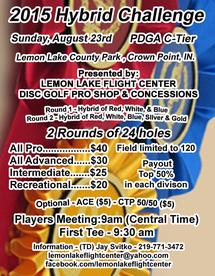 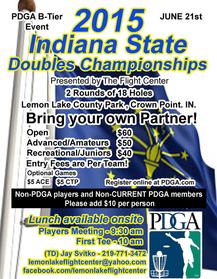 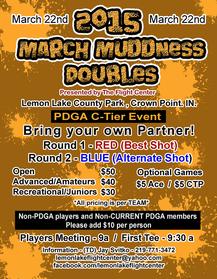 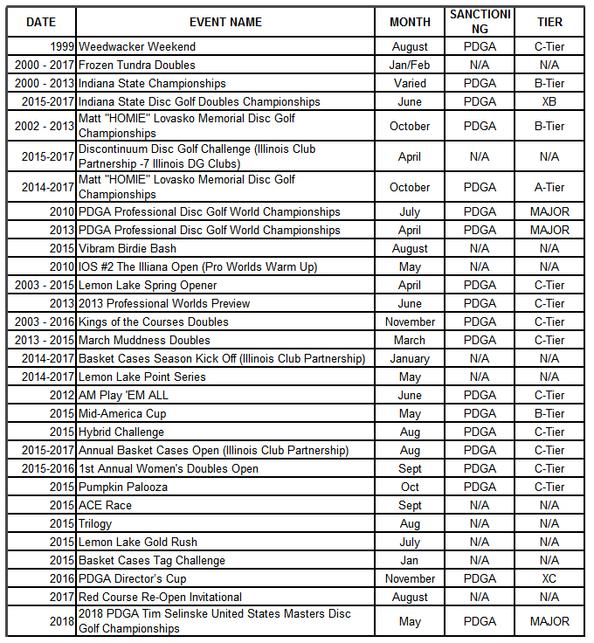 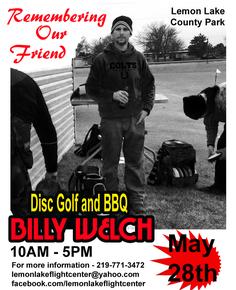 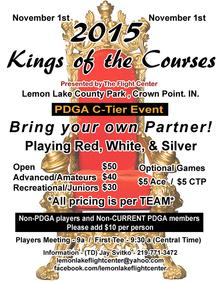 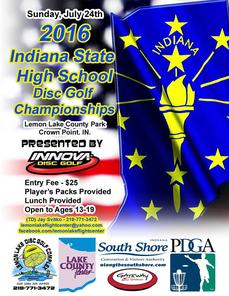 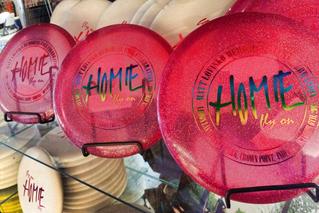 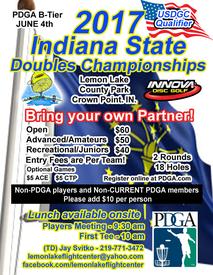 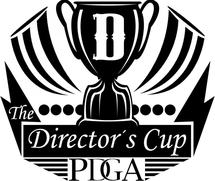 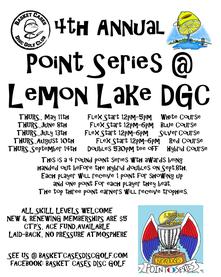 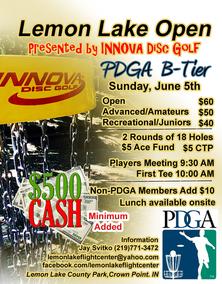 New TEMPORARY SIGNS have been placed on all tee pads throughout the complex 8/2017 while the new permanent signs are being designed.

**RE-OPENED SEPTEMBER 1, 2017**
This course has the most variety, from tight turns in the woods to long challenging par 4's.  This course is a lengthened version of the original 18 holes, Par 54 in standard configuration with a length of 5940 feet.  Note that for Pro Worlds this course measured 6369 with a par of 62.

This course has recently been restored due to the devestation from the Emerald Ash Borer (Beetle) that has destroyed much of this course.  Restoration efforts began in February 2017 and will continue through 2017.  This course re-opened to the public on September 1st.  Work will continue through Fall and likely Winter months to complete the restoration efforts so this course can be played for the 2018 PDGA Tim Selinske United States Masters Championships.

Established in 2003 this course is the most open of the group with 8 challenging wooded shots that feature a stream and elevation changes.  Some holes along the waterfront were removed in 2016 due to rising water.  New holes 8, 9, and 10 were installed near the Dog Park, Hole 12 was also moved to a new position near the road due to rising water.  The course currently measures 6600 feet with a par of 60.

This course established in 2009 is typically the shortest course however this course will be configured to the extended White Course format used at the 2013 PDGA Pro World Championships at Lemon Lake. The course has tricky ravine holes, open meadows and shots through tight woods, and Hole 15 features "The Bathtub Shot".  The max distance in standard configuration is 4384 feet with a par of 55.  Note for Pro Worlds this course measured 8083 with a par of 64.

Original Holes 5, 6, 7 and 16 were closed in 2015 due to excessive erosion and vandalism.  Four new holes were immediately established adding Holes 13 & 14 that were previously used for 2013 Pro Worlds in addition to new Holes 15 and 16 near Shelter 2.

Lemon Lake County Park was opened to the public on May 1, 1972.  The park was dedicated on August 26, 1972 by US State Rep. and House Rules Committee Chairman Ray J. Madden of Gary, IN.  Speakers and dignitaries included Richard Blastick, Lake County Council President; Harold Holmes, Lake County Park Board President; and Crown Point Major, Richard Collins.  Park Manager Charlie Watts and his family, professional landscaper Clark Fowler and the Lemon Lake park staff employees were highly commended for their more than 3 years of work and dedication in establishing many of the park's first amenities.  Rep. Madden proposed a projected population growth of 1 million people to the Lake County Indiana region by the year 1985  This growth would necessitate 10,000 recreation acres of parks.  Lemon Lake became the first of the now 13 parks (36 parks originally proposed) to be opened to the public in Lake County, IN.  Much of the work completed by this group of early pioneers, community volunteers and business developers can be found all throughout the park today.

The Lake County Parks and Recreation Department will mark its 50th Anniversary in 2018.  Throughout its long history, the Park Board has been dedicated to providing a countywide system of parks, trails and amenities that offer recreational, educational, historical and cultural opportunities with access to open space and natural areas.  Today's park amenities include a 1K paved trail around the lake funded in part by the Cedar Lake Junior Women's Club and Indiana Bell in the early 1970's and more than 5 miles of primitive trails in hilly wooded terrains created by the park's department and community volunteers.  Each provide recreation opportunities to the park's visitors.  Lemon Lake is also home to softball fields, open play areas, two sand volleyball courts and a large creative playground, fishing and picnicking, shelters and washroom facilities, BBQ facilities, and a leash-free dog run.  There is an abundance of wild plants and flower rare to the Midwest.  There is also an abundance of wildlife throughout the park including white tail deer, snapping turtles, birds, owls, fish and wild turkey.  The park is also home to one of the few covered bridges still in existence.  The bridge built in 1974 was the first covered bridge built in Lake County at the time in more than 125 years.

THE LEMON LAKE DISC GOLF COMPLEX
The disc golf courses at Lemon Lake were designed, developed and constructed through the collaborative efforts  between the Lake County Parks Department, Park Manager April Brown, PDGA and Indiana Disc Golf Hall of Fame recipient Brian Cummings and members of the Illiana Flying Tigers DGC.  The club name was later changed to The Red Roc Disc Golf Club in 2001 after the passing of friend and disc golf club member Matt "HOMIE" Lovasko.  Work efforts began in the Winter of 1998 with completion of the first 18 hole Red Course design in 1999.   Many variations and modifications for improvements were made during the 1998 - 2009 era.  The 10 year partnership and countless volunteers contributed to the legacy courses now known as The Lemon Lake Disc Golf Complex.

Lemon Lake County Park was awarded as the host site for the 2010 and 2013 PDGA Pro World Disc Golf Championships under the leadership of Tournament Director Brian Cummings, Assistant Tournament Director Jay Svitko and The Red Roc Disc Golf Club.  The park and this event team were the recipients of the "2013 Event of the Year" award presented by South Shore Visitor's Authority and Convention's Bureau for its contribution to the local tourism industry. On April 25, 2015, Lemon Lake County Park and The Flight Center staff received the PDGA Proclamation in recognition of becoming the first PDGA Regional Development Center for Disc Golf. Read the nwi.com article here: http://www.nwitimes.com/sports/recreation/golf/flight-center-disc-golf-shop-named-pdga-regional-development-center/article_3d680b06-e269-524e-861f-0fa9f7fad52a.html

ANNUAL EVENTS
Lemon Lake is the host site of 15 annual tournaments including the well known annual Matt "HOMIE" Lovasko Memorial Disc Golf Championships.  2018 marks the 5th year the event has been awarded as an A-Tier  by the PDGA. The history of disc golf events at Lemon Lake date back to August of 1999.  Today all disc golf programs and events are managed by The Flight Center, Lemon Lake's central service and information hub for the sport of disc golf and visiting park patrons alike.

For a list of Lemon Lake Tournaments go here: https://www.facebook.com/lemonlakeflightcenter/events.